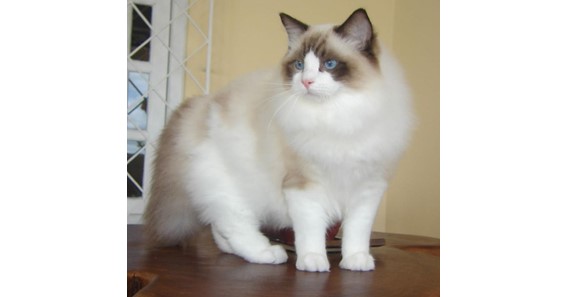 In the family of large cats, the Ragdoll stands out for its gentleness, calm, loyalty and sociability. It is therefore the ideal companion for families with young children who will tend to confuse it with stuffed animals, so flexible and cuddly will it be.

The Ragdoll cat and its origins

Originally from the United States, the Ragdoll cat is the result of a cross between a white Angora cat and a Sacred Birman male. The first litters of kittens were characterized by a perfect mix of the docile, calm and composed character of their parents, while the genetic mutation was observed above all in the relaxation of muscle tone, which earned them the nickname of Ragdoll or “Rag doll” in French. After a strict mating plan, cat breeder Ann Baker succeeded in fixing the breed in 1965 in California. Thus, the Ragdoll cat is quite recent and its official recognition is made in 1971 in the United States and confirms that the very soft character resulting from those of its parents.

How to recognize a Ragdoll?

Its long, massive body is the first physical characteristic of the Ragdoll, a large cat that can weigh up to 9 kg for the male and 5 kg for the female. This is due to a long growth process of 2 to 3 years, for an estimated lifespan of 15 years. If the Ragdoll’s eyes are always blue and its head is of medium size, the coat can have three distinct shades: Colorpoint with a light coat and ears, darker and contrasting mask and extremities, Gloved with the same Colorpoint dress, but with white legs and chin, and the Bicolore with its inverted V on the forehead, dark ears, white legs, collar and belly.

To obtain this rectangular silhouette specific to Ragdolls, cats have robust and muscular legs, with large and round hairy feet, even between the pads. Carried plume, the tail of the Ragdoll is long, while its ears are wide at the base before rounding out to point a little forward. As for its silky and fine fur, it can be long or mid-long and is made up of a combination of guard hairs and undercoats for easy and soft maintenance.

Character traits of the Ragdoll

The ultimate domestic cat, the Ragdoll is a homebody, he likes to snuggle up in sofas and cushions, and his great adaptability helps him tolerate moving and car trips well. What’s more, the Ragdoll cat is affectionate, protective and prefers to spend his day sleeping on his master’s lap if it were up to him. Because he moves very gently and will tend to release his muscle tension when he is in his master’s arms, he is ideal for families looking for a quiet cat who will only need good cat insurance and daily grooming to maintain their skin and fur.

The health of the Ragdoll breed cat

Natural elegance, legendary calm, deep and intense blue eyes, the Ragdoll has something to appeal to all cat lovers. This is an indoor and hobby breed that originated in the United States. Perfect for living with the family, the Ragdoll must however benefit from the best veterinary care, as it is subject to certain genetic diseases. Subscribing to mutual health insurance for cats will guarantee them excellent health.

Hereditary diseases that can affect the Ragdoll

The Ragdoll is also called a “rag doll” because of its more than atypical appearance. This big, long-haired tomcat stands out for its gentleness and calm. Unfortunately, it is a breed with a rather fragile health. In order to benefit from its presence as long as possible, it is imperative to take stock of the diseases that can affect it. The main defect affecting it is hypertrophic cardiomyopathy or HCM. This hereditary, congenital or resulting from another disease (and therefore acquired) heart disease causes a thickening of the walls of the heart which eventually prevents the muscle from working properly.

It is manifested by, among other things, breathing difficulties, anorexia and lethargy. Furthermore, the Ragdoll can be a victim of polycystic kidney disease in the form of cysts appearing in the kidneys. When the diagnosis is positive, the cat shows symptoms of chronic kidney failure due to destruction of kidney tissue. He ends up dying prematurely.

Some common diseases to watch out for

In addition to the two genetic diseases mentioned above, the Ragdoll is not immune to various feline conditions. One of them is feline infectious peritonitis. Deadly and viral, this disease affects the main organs such as the brain or the lungs. The cat can die very quickly especially since so far, there is no treatment yet. It is also important to watch for feline leucosis, which favors the appearance of tumors or various infections. Here too, the absence of a remedy prevents the care of the animal.

How to take care of the Ragdoll?

The Ragdoll has a rather long life expectancy since it ranges from 12 to 17 years. This longevity is only possible if you take great care of your feline. Already, because of his long hair, it is necessary to give him regular brushing to prevent them from swallowing it and the hairballs end up causing intestinal obstructions.

Ears and eyes should be checked regularly. Also, it is crucial to offer the best food to the Ragdoll. Premium croquettes are highly recommended. A homemade diet is possible provided that it is set up with the help of a veterinarian.

Last essential point: the Size of Ragdoll Cats are also beneficial from health insurance. This coverage saves you from overpaying vet bills and ensures your feline accesses the best care on time. It is available in several formulas, but given that this breed is prone to certain illnesses, it is preferable to opt at least for intermediate insurance contracts which reimburse expenses related to illnesses (see the proposals on this site ). The reason? Basic contracts only cover accidents.

Thinking of becoming a content creator? Here’s what you need to know!

Fighting the snakes on your private property

What Is The Best Age To Train A...

What Causes White Foam In Dogs?

What Is The Best Age To Train A...

Fighting the snakes on your private property