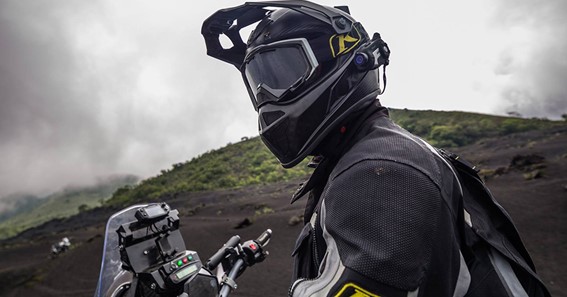 While riding is always fun, we still cannot overlook the fact that it is risky. The nature of the ride itself exposes our body to its immediate environment.

Fortunately, there are methods to reduce such threats, like wearing a helmet. Over the years, helmets have also been improved to make them safer.

This may lead you to wonder about getting a motorcycle helmet heads-up display. Will, it really make a significant impact on your safety? Let’s find out.

What Is a Helmet-Mounted Display?

A helmet-mounted display is a new piece of equipment that you can mount to a full-face helmet. One of its most popular features is the ability to shoot a video of your ride, but that’s not the only thing that this tech is capable of.

In fact, its main function lies in the semi-transparent screen that can provide you with different information (depending on the brand and model of your chosen gadget).

The most used feature, though, is the moving GPS map. You’ll also be able to access a live view of your camera that can be exceedingly helpful in certain situations.

Don’t worry; most helmet-mounted displays have a set of controls that you can just attach to your bar. This set allows you to enjoy other neat features such as phone and music controls, view switches, and even voice activation.

The secret lies in getting used to it. As this is a new device that you’ll have to incorporate into your driving experience, it can take a while for you to get used to this semi-transparent screen.

Thus, it can be quite distracting to use in the beginning. This also means that having a helmet-mounted display can (at least for a while) make your riding awkward and even slightly risky.

However, if you do take the time to learn its controls, it can definitely improve not just your safety but driving enjoyment.

This was made clear by a study presented at the 23rd International Conference on Intelligent User Interfaces.

The researchers looked into how driving behavior was influenced by the information provided by the helmet-mounted display. The results were very promising.

Some of the subjects who were chosen for the study were riders who exceeded speed limits. The study revealed that the use of a helmet-mounted display that showed their current speed made them more conscious and significantly slower.

Velocity isn’t just the only useful feature that is currently being developed for heads-up displays. In one study, this time presented at the 2019 IEEE 8th Global Conference on Consumer Electronics (GCCE), the engineers proposed an inertial sensor to be added that can monitor the posture of its riders.

This seeks to alert the rider if a long-term, head-down position is detected (such as the case when one accidentally drifts off to sleep.

As with any developing technology, helmet-mounted displays aren’t perfect. We may also take some time to discover any long-term risks associated with its use. In the meantime, there are studies that seek to expose their weaknesses.

For instance, one report suggested that using a helmet-mounted display can be risky, even after you have already mastered its controls.

That’s because, in the end, it will still compete with one’s visual attention instead of just focusing on the road.

Their warning systems should also be improved. For instance, a rider must be able to determine whether his gear is alerting him of his head posture, a potential collision, or just a signal to make a turn.

There’s also this added challenge to make them simpler to learn. This seeks to ensure that even if you do use your helmet-mounted display to the best of its functions, it still won’t hinder the speed of your judgment and reaction.

It also seeks to prevent overthinking while on the road.

Is a Helmet-Mounted Display for You?

In the end, it will still boil down to whether having a helmet-mounted display can make your trips safer or not. It offers a lot of truly convenient features.

Some can even save our lives. On the other hand, we also acknowledge that there are factors to its design that can also pose some risks.

We definitely recommend still giving it a try. There are a lot of riders out there who have smoothly transitioned to using it and have now found it really helpful in their daily adventures.

If there’s one tip that can probably help, it would be this: attach your helmet-mounted display when your driving environment isn’t very demanding, especially if you’re still learning the system.

This way, the learning curve that comes with using this tech won’t make you vulnerable as much. Then, once you’re confident already, and it has already become second nature, you’ll be able to use it safely and without much risk.

Keep in mind that these varying controls have been accessible for car owners for quite some time already.

Don’t let the difference in vehicle types hinder you from taking advantage of the features this tech presents. We wish you safe travels!

To Know Some Great Stuff Do Visit IncludedNews

To Know Some Great Stuff Do Visit IndiaPlus

To Know Some Great Stuff Do Visit InfoDeath

How To Start A Coworking Franchise

How To Choose The Correct Rifle Scope Ring...

The Importance Of Windshield Mobile Repair

What Is A Consumer Proposal?

What Does An Ozone Generator Do?

Reasons why collecting medals and medallions are a...

Everything You Need To Know About Custom Katana

The Benefits Of Life Streaming